Passing from mythology to history, during the prehistoric times, we meet the Cretans, who discovered and exploited the minerals of the island. In the 1800’s BC, the Mycenaens reached Serifos, preceded by the Phoenicians. The walls in Liomadra, the White Tower and the tombs around these areas are the traces they have left on the island. 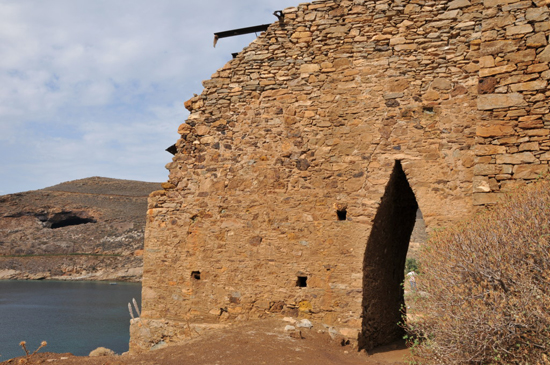 In the 6th century BC, Serifos flourishes thanks to its mines. It has already been an Ionian colony and democracy rules. It is a member of the amphictyony of Delos and enters the Athenian Alliance, taking part in the Persian wars. Unfortunately, most ofthe findings of this civilisation have been looted and gotlost. What remains of these years is exhibited in thearchaeological museum in Hora.

The Hellenistic period left many monuments – an oil press, a semi-circular base, a small cistern, things of clay and stone and the Castle of Grias, where three parts of its walls still remain. In 146 BC, the Romans conqueredthe island, which at the same time was repeatedly attacked by pirates but managed to maintain its autonomy as far as the election of its governor was concerned, in accordance with the Roman law. During this period the island became the destination of many roman political exiles.

During the Byzantine period, the island was still the destination of political exiles and showed no development. On the contrary, during the Venetian domination the cultural and economic growth was quite amazing. TheVenetians brought slaves to the island and the mines reopened after 1.000 years.

During the Turkish domination the island suffers from pirate attacks and the mines close down resulting in gradual regression. In later years, the development of the island is connected with its mines. Around 1870, the Greek state grants concession to the first mine companies to exploit the mines.

Today, the population of Serifos has decreased and most of its people are in tourism, agriculture and fishing. The island has managed to maintain the beauty of the Cyclades and welcomes thousands of tourists every year.